The cryosphere, those regions on and beneath the surface of the Earth where water is in solid form, is undergoing some of the more visible and noticeable changes on our planet. Most of these changes involve a reduction in the mass of ice and snow in a warming climate. The longer satellite, airborne and in situ observations now available, together with reconciliation of prior differences between the different satellite methods, have greatly improved quantification of change in the ice sheets of Antarctica and Greenland. The IPCC Fifth Assessment Report concludes that it is now clear that both ice sheets have lost mass over the last two decades, with some evidence for an increase in the rate of loss with time, particularly from Greenland. Together the ice sheets contributed an average of about 1 mm/yr to global sea level rise during the period 1992-2011.

Glaciers world-wide, with some exceptions, have also continued to lose mass adding in total a further 0.8 mm/yr to sea level between 1993 and 2009. The contribution to sea level rise from melting ice on land now exceeds the contribution from ocean thermal expansion. The AR5 range of projected sea level rise over the next century is similar to that from previous IPCC assessments and, although the possibility of a rise by more than 1 m by 2100 is now largely discounted, ice sheet melt will continue to raise sea level well into the future. The annual mean extent of Arctic sea ice has decreased by about 4% per decade since 1979,with the greatest seasonal losses in summer and spring (about 6% and 7% per decade respectively).

The latter is a consequence of the loss of much of the multi-year ice in the Arctic, with an accompanying drastic reduction in ice thickness and volume. In the Antarctic however, sea ice extent has increased by about 1.5% per decade since 1979, although there are large regional differences in the changes, and no information on change to Antarctic sea ice thickness. In addition, the seasonal extent of snow cover in the Northern Hemisphere has decreased since at least the 1950s, with the greatest reduction in spring, and permafrost in many regions has warmed and thinned since the 1980s. 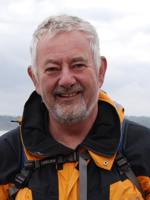 Ian Allison is an Honorary Research Professor at the University of Tasmania, and an Associate of the Antarctic Climate and Ecosystems Cooperative Research Centre. He has studied ice and climate for over 45 years participating in or leading 25 research expeditions to the Antarctic. Ian has published over 100 peer-reviewed papers on Antarctic science on topics including ice shelf - ocean interaction; Antarctic weather and climate; sea ice; and the mass budget of the Antarctic ice sheet. He was co-Chair of the ICSU/WMO Joint Committee that organised and coordinated the International Polar Year 2007-2008, a polar research program involving 50,000 participants from 60 countries. He has been a Lead Author of both the Fourth and Fifth Assessment Reports of the Intergovernmental Panel on Climate Change (IPCC), and is the current President of the International Association of Cryospheric Sciences of IUGG. In 2012, the Scientific Committee on Antarctic Research awarded him their Medal for International Scientific Coordination.